Happy Holidays from the JeffLangeDVD Family! 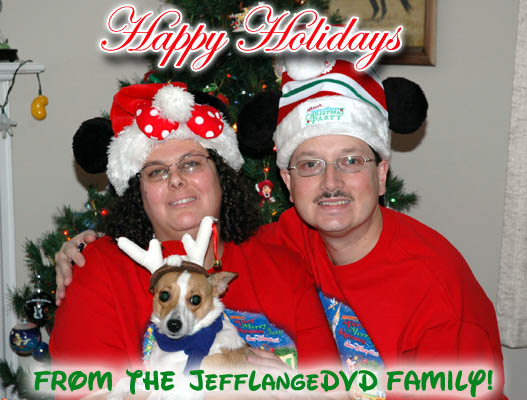 Hi everyone. Just a quick reminder that the Walt Disney World Christmas Day Parade is coming up and from what I hear from friends who attended the taping a few weeks back, it's a must see this year. Below is the official press release with all the info:

Lake Buena Vista, Fla. (Dec. 3, 2007) -- This winter, cozy up and get ready for the holidays -- Disney style -- as Disney Parks prepares to shine brighter than ever when many of today's biggest stars gather on both coasts for the 24th annual "Walt Disney World Christmas Day Parade." On Dec. 25, hosts Regis Philbin and Kelly Ripa once again will lead the Emmy Award-winning holiday special from Walt Disney World Resort in Lake Buena Vista, Fla., and Ryan Seacrest will again host from Disneyland Resort in Anaheim, Calif.

The special will air Dec. 25, 10 a.m. Eastern and 9 a.m. Central, Mountain and Pacific times on ABC-TV, and will be broadcast in HD for the first time.

The Walt Disney World Christmas Day Parade is sure to sparkle as it glides down Main Street U.S.A. at the Magic Kingdom park in Florida and Disneyland park in California to a brand-new musical score.

In addition to the celebrity performances and appearances, this year, viewers will celebrate Christmas morning with "Enchanting" new Disney characters, plundering pirates, some of Disney's favorite holiday traditions and awe-inspiring floats -- all sprinkled with pixie dust.

Stars from stage, screen and song will shine throughout the two-hour special, with a Christmas morning entertainment lineup for the entire family. Featured performances include (talent subject to change):

America's hottest entertainment sensation, Miley Cyrus, the multi-talented performer and star of Disney Channel's popular series " Hannah Montana," will sing the energetic, seasonal favorite " All I Want for Christmas is You."

Stars from Disney Channel's blockbusters "High School Musical " and "High School Musical 2" -- Vanessa Hudgens , Corbin Bleu, Monique Coleman and Ashley Tisdale -- will give a holiday twist to one of the popular tunes from " High School Musical 2." The group performs a customized version of the hit song "What Time Is It?" and answers the song title's question with a new musical answer, "It's Christmas Time! "

Songstress and R&B legend Patti LaBelle, who recently released her newest CD, " Miss Patti's Christmas," will perform "It's the Most Wonderful Time of the Year."

Multi-platinum-selling singer-songwriter Jessica Simpson will bring the curtain down on this year's special with a moving rendition of the Christmas classic, "Hark! The Herald Angels Sing ." Joining Simpson will be the world-famous, New York-based Harlem Gospel Choir that has performed for Nelson Mandela and the late Pope John Paul II.

One of the hottest musical trios performing today, sibling pop-rockers the Jonas Brothers, sing one of their latest tunes, a seasonal pop-rock song titled "Girl of My Dreams."

Latin superstar sensation Menudo will debut their version of the holiday favorite "This Christmas."

"American Idol" sweetheart Katharine McPhee will perform a Disney Princess-inspired number, singing a medley of some of Disney's classic tunes.

Traveling down Main Street U.S.A. at both Disneyland Resort and Walt Disney World Resort, the parade will introduce several new floats this year, including:

The "Rat Pack" is back at Disneyland Resort, with a " Ratatouille" float spicing up the day. The float, inspired by this summer's Disney-Pixar hit animated film, features wanna-be chef Rémy and his Parisian pals.

Some of the other highlighted parade floats featured during the bi-coastal holiday celebration:

* Disney-Pixar's " Cars" will be featured, with gear-jamming good times from the film's car stars, Lightning McQueen and Tow Mater.

* Aladdin and Jasmine make their way in the procession on horseback.

* The Seven Dwarfs trade in their usual diamond mine duties for a very special, jeweled holiday tree float.

* Closing the parade portion of the program is the big guy himself, Santa Claus, and his trusty reindeer.

See More in HD -- for the First Time!

Broadcast in HD and Surround Sound for the first time, the 24th annual " Walt Disney World Christmas Day Parade" airs on ABC Christmas Day. The show will also be broadcast in English and Spanish (SAP).

Welcome back for more great photos from the holidays at Walt Disney World plus a recap of this seasons holiday titles and shipping options for Christmas shopping.

The photos below are from the 1993 Mickey's Christmas Cavalcade at Walt Disney World's Magic Kingdom. Take note of the knights on horseback. They appear similar to the lead off from Disney’s Enchanted Adventures Parade at the Pirate & Princess Party.

I always find it interesting to watch the evolution of these parades. I have seen quite a few floats come and go over the years (but most are recycled). Below is the Winnie the Pooh tree that is featured in many of the special event parades (from left), Mickey's Christmas Cavalcade 1993, Mickey’s Once Upon A Christmastime Parade and this years Boo-To-You Halloween Parade. 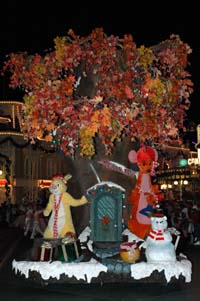 Somewhere along the way Owl (below left) has flown the coop and became replaced with Rabbit. Currently the tree's leaves stay in a permanent state of orange for use in the various parades. 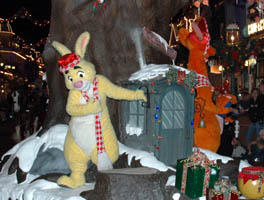 Please check back soon for more holiday photos in my next Photo Memories feature.

Below are my latest holiday releases. As always I will do my very best to get your orders shipped the same day as I receive them. If there is a need for a special rush order or overnight delivery please email me at Jeff@JeffLangeDVD.com and we can make arangements. Thanks to everyone for all the support and holiday wishes, I really appreciate it! 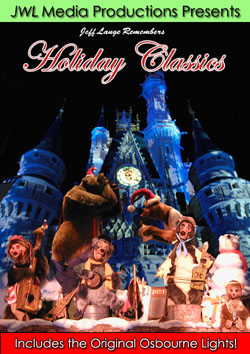 Seasons Greetings from Jeff Lange with this all new DVD filled with holiday memories from Christmas past at the Walt Disney World resort.

The yuletide fun begins as you experience this daytime holiday procession featuring highlights from the 1993 version of Mickey’s Very Merry Christmas Parade. All the classic parade elements are included plus long time retired floats and rarely seen characters such as Roger Rabbit and Owl.

Step on in to Grizzly Hall and get ready for this special holiday edition of The Country Bear Jamboree. This was recorded from multiple angles to capture every nuance of this Christmas time classic. Reunite with all your favorite bears including: Henry, Liver-Lips McGrowl, The Sun Bonnet Trio, Teddi Barra, The Five Bear Rugs, Gomer, Trixie and everyones favorite Big Al.

As the snow flakes fly you join Grand Marshals Mickey and Minnie for this Magic Kingdom favorite that also features Gingerbread Men, Swaying Christmas Trees, Santa’s Elves, Toy Soldiers, Reindeer, and the S.S. Disney Riverboat. This was the extended version of the holiday classic featuring the Disney Princesses in horse drawn carriages. The grand finale is an appearance by Mrs. Claus and Santa himself.

Step back in time to the Disney-MGM Studios and stroll along Residential Street to experience the spectacle of the Osbourne Lights as it was originally presented. Relive your favorite holiday scenes while searching for hidden mickeys along the way.

Pick up a copy of 'Jeff Lange’s Holiday Classics’ today and relive all the magic or experience it for the first time.

Hi everyone and welcome back for another update as promised. I hope you are all having a wonderful holiday season so far!

Below are a few more photos from the all new Mickey's Once Upon a Christmastime Parade. Below are some of the brand new floats for this year's edition, The opening title and gift box floats. The new parade music really does grow on you and I would like to see it released at some point like the brand new Magic Kingdom Event Party Music CD. 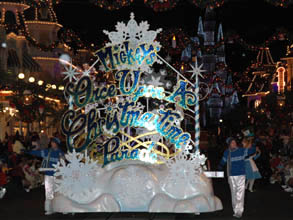 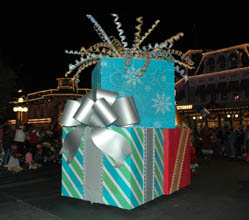 When I was at the Magic Kingdom recording the first Mickey's Very Merry Christmas Party of the season I had the pleasure to meet Samanth Brown from the Travel Channel. She was doing filming for an all new Travel Chanel special titled Disney Holiday Magic with Samantha Brown. The show is scheduled to air Dec 11th at 8:00. Also below is one of my favorite holiday window decorations at the Disney-MGM Studios. 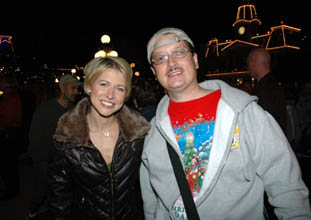 This latest photo memory subject comes from my research while working on my upcoming Holiday Classics DVD. I was going thru video footage and scanning photos when I came across some great shots and print materials from Mickey's Very Merry Christmas Party 1993. 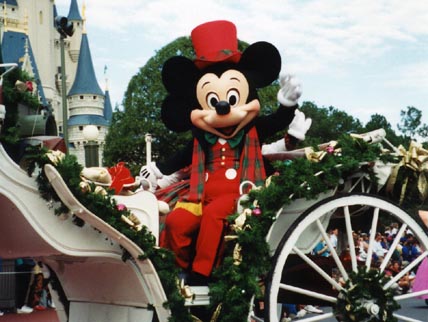 Below is a brochure for the 93 party. It's really not fair to compare what they did then to now as the event itself has gotten huge in recent years. Note the number of nights it ran back then, only four.

I am deep in production on my next release Jeff Lange Remembers Holiday Classics featuring Mickey's Christmas Cavalcade from 1993, The Country Bear Christmas Special (multi angle 2003-2005), Mickey's Very Merry Christmas Parade from 2003 and the Original Osbourne Lights on Residential Street (1996). I hope to release this very soon. Below is a sneak preview of this all new DVD cover.

As always, if you want to request a future DVD idea, Photo Memory topic or comment on anything, just drop me a line at suggestions@JeffLangeDVD.com

As a special thank you to those that order Jeff Lange's Holiday Treat 07 DVD direct from this site, we are including the following as a free bonus while supplies last.

This was the Holiday Things To Do ! Party Guide Map given out at Mickey's Very Merry Christmas Party at Walt Disney World's Magic Kingdom. It makes an ideal companion to the new DVD.

Posted by Jeff at 1:32 AM
Categories: Promotions