I'm hard at work finishing up the Polynesian Resort DVD that should be released within one week. In the meantime, please check out Mousesteps.com for both a poll to vote for my next resort DVD, as well as to enter a contest to win one of the newly released Polynesian Resort screensavers! It turned out beautifully, and will make a wonderful Christmas present for anyone who loves the resort. The contest ends on November 7th.

Be sure to check out my latest DVD release: Jeff Lange's Trick or Treat 5 (Mickey's Not So Scary Halloween Party 2008).

Now you can experience the beauty of Disney’s Polynesian Resort on your home computer! Over 100 high-resolution images let you bring home the South Seas charm of this beloved original Walt Disney World resort!

* Over one hundred images

* Any image as your wallpaper

* Easy to install and use

Halloween Special - Trick or Treat: The Complete Collection (Mickey's Not So Scary Halloween Party 2003-2008) - All 5 Discs For A Special Low Price

To purchase Jeff Lange's Trick or Treat: The Complete Collection (Mickey's Not So Scary Halloween Party 2003-2008) - all 5 discs - please click this LINK .

Also included in each order is a surprise Halloween Treat.

This offer will expire at midnight on Halloween! 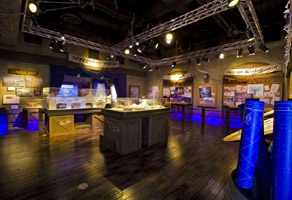 ANAHEIM, Calif., October 15, 2008 – Nestled in the Golden Vine Winery at the base of Grizzly Peak in Disney’s California Adventure Park, the Walt Disney Imagineering Blue Sky Cellar is a place where Guests will get an exclusive sneak preview of what is new and what is in store for the expansion of the Disneyland Resort. Beginning October 20, Guests will view working models as well as dozens of concepts and sketches from Disney Imagineers, the creative minds behind the design and construction of Disney theme parks and attractions.

With Blue Sky Cellar, Guests will be invited for the first time to preview works in progress at Disneyland Resort by immersing themselves in a facsimile of an Imagineering workspace. Based on the belief that idea gathering is best when “the sky’s the limit,” the Blue Sky Cellar is designed to resemble an Imagineering “charette,” an extended creative idea development meeting. Guests receive an inside-look at how Imagineers take “blue sky” ideas and refine them into the classic storytelling that characterizes Disney Theme Park attractions and adventures. 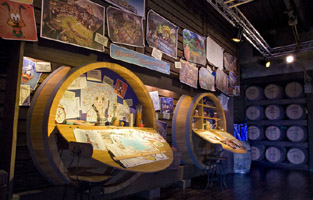 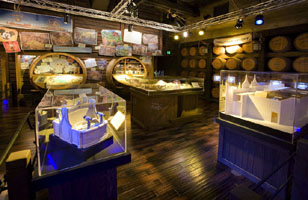 In this whimsical immersive setting, Imagineers have taken over a former wine cellar and set up shop. Wine barrels have turned into work stations and the former wine tasting room has become a screening room where videos showcase the behind-the-scenes magic that goes into the creation of new and upcoming attractions for Disney’s California Adventure.

Guests will view several new attraction models, including the newly envisioned Paradise Pier area with its turn-of-the-20th-Century look, ride vehicle maquettes from Toy Story Mania!; and the new character overlays to the Games of the Boardwalk. Special features include updates and character additions to attractions such as Mickey’s Fun Wheel (an enhancement of the current Sun Wheel) and Silly Symphony Swings (a refreshed and rethemed Orange Stinger).

Brand new sketches and artwork line the walls including images of the new entrance area, soon to be known as Buena Vista Street, which will bring to life a nostalgic look at Los Angeles from the 1920s and 30s when Walt Disney first arrived in California; a Red Car trolley, reminiscent of the Pacific Electric Railway; and a new central plaza area including a replica of the Carthay Circle Theatre, where Walt premiered Snow White and the Seven Dwarfs.

The “coming soon” area features images of Disney’s World of Color and The Little Mermaid attraction, and looks even further ahead to Cars Land, a 12-acre expansion of the Park which will bring to life the town of Radiator Springs from the Disney?Pixar animated film Cars, complete with three new attractions for the whole family. Additionally, Guests in Blue Sky Cellar will have fun testing their knowledge of Disney trivia at one of the interactive workstations.

The screening room features Imagineers describing the approach and vision of the Disney California Adventure expansion. Guests will see footage of model-making, sculpting, blue sky meetings and all the aspects of bringing a Disney concept to life.

Included in the original announcement of the multi-year expansion of the Disneyland Resort in Fall 2007, the Blue Sky Cellar is part of the overall commitment to keep the community and Disneyland Resort Guests informed of the exciting new and upcoming plans for the Resort. Future updates will focus on other new areas and attractions, and Guests are invited to return periodically for additional exciting information. 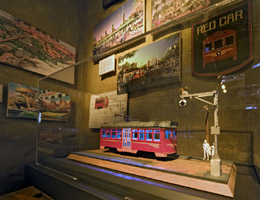 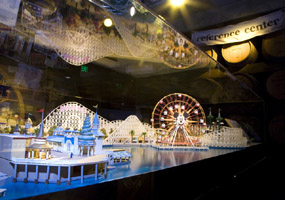 About the Disneyland Resort

I had a great trip to central Florida last week, and accomplished all I set out to do. Below are the highlights of the trip:

This years NFFC Florida Convention was excellent as expected! Highlights included author David Koenig, who gave a highly informative and entertaining presentation on Epcot's World Showcase concepts that were never realized. Animation Legend Joe Hale (below right) gave an interesting and candid talk about working at the Disney Studios. His recollections included memories of Walt Disney and dealing with Jeffrey Katzenburg, Michael Eisner and more!

Another highlight was Ike Eisenmann (below left), who spoke about his work on the original Witch Mountain movies. He segued into his involvement with the upcoming "Race to Witch Mountain" film and his own animation company. A very special tribute to Disney Legend Ralph Kent featured emotional memories from Gary Sohmers and a panel of Ralphs friend and co-workers. This was followed by a spirited auction where some of Ralph's memorabilia was auctioned off by Mr Sohmers to benifit Ralph's estate.

The convention also included a tour of the Walt Disney World Merchandise Warehouse, the induction of three new NFFC legends: Hank Dains, Jess Rubio, Phil Smith and Gretta Verity. A very detailed talk about the history of the Adventurers Club from Disney historian Jim Korkis rounded out the convention and got everyone ready for the special event that followed!

When Pleasure Island opened in 1989, I was 22 years old. It was the perfect age to enjoy all that P.I. offered! That included the Comedy Warehouse, a variety of nightclubs - and the mysterious Adventurers Club. I enjoyed the Island on my frequent Disney trips, but was especially enamored with the interactive characters and atmosphere of the AC. When I found out about Pleasure Island's closing, I was especially saddened as I would not be able to visit the final night. Fortunately, I was given another chance to say goodbye with the NFFC during a wonderful evening as part of the Florida Convention.

I enjoyed a special evening with other NFFC members, who'd waited excitedly to enjoy the Club one last time. All the characters were in attendance, and even more interactive than usual due to the absence of the library shows.

We were treated to a hilarious New Member Induction Ceremony poking fun at all the "Disney Fanatics" in the room plus two Mask Room shows and two Treasure Room shows!

The actors seemed genuinely happy to host our group, and talked out of character a little more than usual at the end of the evening. Jim Korkis ended the eventful night with a final tribute to the Club and the performers (photo below of the cast posting for us).

It was an unforgettable evening, and I will truly miss this unique Disney experience. I hope it returns in some form in the future. For more photos of this very special event, please visit partner site MouseSteps.

I recently spent 3 days recording footage at Disney's Polynesian Resort for an upcoming DVD and screensaver release! Please feel free to email suggestions for a future resort title to: suggestions@JeffLangeDVD.com.

Be sure to check out my latest release: Jeff Lange's Trick or Treat 5 (Mickey's Not So Scary Halloween Party 2008).

As a special thank you to those that order Jeff Lange's Trick or Treat 5 direct from this site, I am including the guide above as a free bonus while supplies last. This was the Boo! What? Where? When? Party Guide Map given out at Mickey's Not So Scary Halloween Party at Walt Disney World's Magic Kingdom. It makes an ideal companion to the new DVD.

I have returned from a crazy but fun week in Florida. The trip was very productive, producing over 15 hours of video footage! I was able to attend the NFFC Florida Convention, The Adventurers Club dinner, another Mickey's Not So Scary Halloween Party and work on some upcoming DVD releases. I also visited with friends and enjoyed meeting some very nice people who stopped by my table the NFFC show and sale on Sunday!

Please check back tomorrow for the beginning of my Florida recap!

This week I will be traveling back to Walt Disney World for a very busy week of activities. Highlights include the NFFC Florida Convention which will also include the NFFC World Chapter Meeting and a special Adventurers Club event as well as Epcot's 26th Anniversary and maybe some Halloween fun!

I will start my trip by visiting Epcot for it's 26th anniversary on October 1st! It will be interesting to contrast what will be a low-key day this year to the 25th celebration from one year ago. I had a great time last year reminiscing about Epcot's past and enjoying an unforgettable day!

Click HERE for more information or to purchase any of these Epcot's 25th Anniversary Collectors Edition DVDs.

Look here next week for an update on the NFFC event, including the Adventurers Club dinner! The NFFC Florida Convention will be held at the Regal Sun Resort from October 3rd - 8th, 2008. If you are attending the show and sale on October 8th, please stop by and say hello (click HERE for a flyer with a $1.00 off coupon). I look forward to meeting everyone! For more information about the NFFC please click HERE.

As always, while I am traveling you will still receive the same level of quality service and guarenteed 24 hr shipping you have come to expect from JeffLangeDVD. If you want to request a future DVD idea, Photo Memory topic or comment on anything, just drop me a line at suggestions@JeffLangeDVD.com.