Hi everyone, I recently received the following note and was very touched by her story. I decided it would be nice to share it with my readers and after getting Erin's blessings I am posting for all to enjoy. This is what makes doing these DVDs worth it for me. I'm glad to spread the Disney magic in my own little way and to know it is appreciated.

You won't remember me, but I contacted you about your WDW 20th anniversary DVD. It was at least a month ago and I did purchase it. I said I needed to make sure you could see the dancers in the parade because a friend of mine was one of them. Well, I hope you don't mind, but I wanted to tell you what happened. Warning: I'm long winded, especially right now when my brain's fried too. So settle back in your chair or delete this and run for your life while you can!

My friends Becky and Adam have been going through such h_ll in the past year and more. She lost her job, was diagnosed with a debilitating condition, they've both been in the hospital in the past month and a half..... Lots of stress and pain. We got together (along with their 2 year old daughter Sophia) last Thurs night with the hopes of getting them out of the house and maybe having some laughs.

I brought your DVD as a surprise with me. Quick backstory: Becky was a CM at WDW for 7 years as a dancer, performer, and choreographer. Her father is a former Imagineer who worked with Walt Disney himself and then later in WDW. When we first met Becky, we asked if we could have seen her perform on one of our trips. One thing stood out: the Party Gras parade (the one with the big character balloons for WDW's 20th birthday). Unfortunately, I did the video we had of it, and I was stuck behind tall people. I got the balloons, but not the dancers.

Then I saw your DVD and contacted you. I actually held my breath as we popped it in the player (keeping up a mantra the whole time: "please let her be on it!" -- she could have been sick, who knows?), but there she was! She performed in the Carmen Miranda - Minnie Mouse section. We got a closeup of her dancing right by the camera, then the women move to stand on the Minnie float and she was right up front! Becky was blown away! She told me that she has no video of any performance and to see this brought so many good feelings back! I hugged Sophia and pointed to the screen the whole time whispering, "That's your Mommy!" Becky was in her own world, transported back 14 - 15 years, and I realized she was whispering the dance moves to herself or friends' names as they went by. Including a laugh: “They grabbed me and said I had 15 minutes to learn the dance.” She replaced someone who couldn’t be in it and stayed, ending up as dance captain for her unit.

Then the next magic moment came. I whispered to Becky, "Look at your daughter."

Sophia knows all about Disney parades on TV. She watches their recording of the 2006 Christmas parade at least once a week. That her own mother was one of those magical people awed her. That alone got to Becky, but then Sophia tried mimicking her dance steps. With happy tears in her eyes, Becky got up and said, "Do you want me to teach the dance?" and Sophia yelled happily, "Yes! I do Mommy dance! I grow up and do it in Disney!"

The sight of Becky breaking down the dance to easy things for Sophia to repeat..... what can I say? (“First, we cha-cha.” Sophia walked back and forth. “Then we swing our skirt. And sing Sumba! Sumba! Sumba!” A 2½ year old marching, swinging an imaginary skirt, and yelling Sumba! Sumba! Sumba! is really something to see!)

Becky was also in Spectromagic which was on the DVD too! (Tougher to see though since it's nighttime, but we picked her based on body language. As she said, “I was the only dragonfly to do a low-medium-and high arm movement which gave me 3 spins. The rest did 2.”)

I gave them the DVD as a gift and got a big hug in return.

But the story isn’t done:

As I said, Becky’s father is David Anderson, one of Walt’s Imagineers. Coincidentally, “Mickey Mouse” mails Sophia once in awhile. The same day as the DVD, another envelope came to her with a bunch of photos, including Walt Disney, Walt and Mickey, and the Partners statue. The note read, “This is my daddy, Walt Disney. He was pals with your Papa! (Her word for her maternal grandfather.) Love, Mickey!”

Friday morning, Becky called her father and Sophia spoke first. She started off by saying that Mickey Mouse sent pictures of his daddy and that Papa and Walt were pals! But she had to go because the Mommy show was on. “Sumba! Sumba! Sumba!”

(Also that she had ridden in the “magic car” and it was a monorail. Translation: I drove her around the block in my mustang convertible – roof down – with the full WDW monorail spiel playing on the CD.)

Naturally, he was stunned and Becky had to fill him in. I didn’t know it, but her family never saw her in that parade. One plan after another to get there got interrupted. The chance to see her on the DVD has them so excited! Plus, that his granddaughter wants to hear him talk about his pal, Walt Disney, Mickey Mouse’s daddy.... and that she’s talking (albeit a toddler’s dreams) of being the 3rd generation in their family to go to Disney.... They’re coming out in September and now it has a whole other meaning to it too.

(He also says he wants a ride in the magic car with the monorail spiel!)

What a great night. If even for a little while, Disney magic brought some happiness to some people, who brought it to so many others, when they really needed it.

Thank you! Without your DVD, that night wouldn't have happened.

Hello everyone & welcome to my photo memories #13, featuring part one from another Epcot Center classic attraction World of Motion! I hope you enjoy the photos. 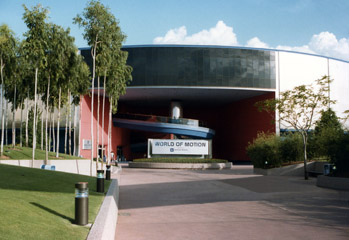 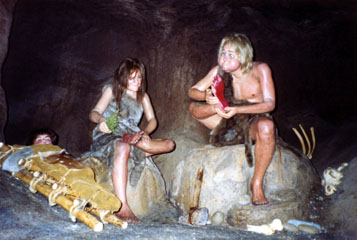 I loved the concept of the attraction going outside and back (which it still does today as GM Test Track). The cave people above remind me of the animatronics from the 1964 NY Worlds Fair. Just don't tell GM they were in the Ford Pavilion! 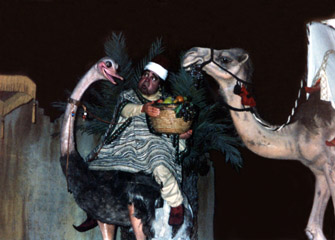 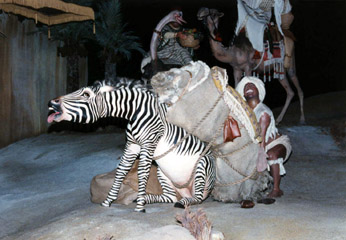 These two figures ended up traveling to Disneyland to become Pirates in the updated 1997 PC re-theming of Pirates of the Caribbean after World of Motion closed in 1996. 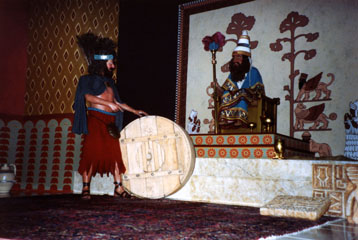 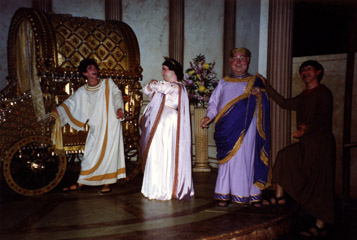 The invention of the wheel above. Would you buy a used chariot from this man? Please check back next week as we continue out World of Motion photo tour.

Lately I have been getting a number of emails asking about my next Epcot's 25th Anniversary release. I am currently working on Journey Into Imagination. It will feature multiple vintage ride thrus, full coverage of the original Image Works, a photo slideshow of images from the attraction, the short lived second version plus the updated Image Works, the current version featuring the return of Figment plus much more. Please check back here for more details and release information. Below are some photos of the stars of the attraction! I even had the chance to meet them in person back in 1991 (we all look so young). 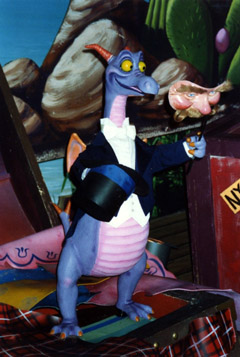 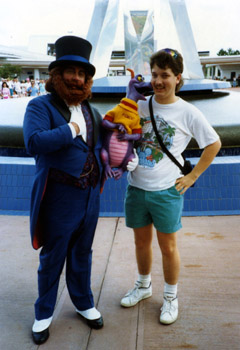 Jeff Lange takes you on a trip back in time to celebrate Epcot’s 25th Anniversary. This fourth in a series, features the Future World classic attraction World of Motion, Presented by General Motors.

This incredible video was recorded with an audio mixer and two microphones to capture the sounds in front of you and the narration from the speaker behind your head. Features full coverage of the exterior, que & load area plus all your favorite ride scenes.

Meet ’Bird’, and an assembly line robot,’Tiger’ for a lively comedy show that explains the workings of the GM assembly line.

Step into the GM corporate lounge for a complete tour. Enjoy the view out the large windows overlooking the park.

Another whimsical look at the history and achievements in transportation. This was my final recording of this attraction.

A photo montage of over sixty vintage images spanning over a decade of memories. The slideshow features the attraction itself and the Genaral Motors TransCenter displays.

A bonus ride on the Future World classic.

This is the earliest ride footage available, Includes a brief look in the GM TransCenter.

A final ride thru at night.

These historical images trace the World of Motion figures & props to their current locations.

Features full coverage of the exterior, que & load area, all your favorite ride scenes plus the Inside Track Discovery Center.

Welcome back to Photo memories #12, part 4 of Epcot Center's Horizons. This is the final edition of the series... for now. 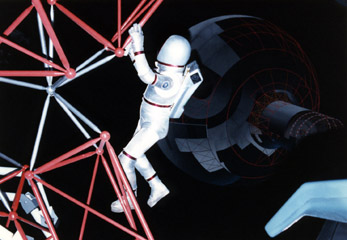 The space station Brava Centauri.This scene really blew me away! It just seemed like such a cool concept to live in space. I always wondered how they filled the swimming pools up there. 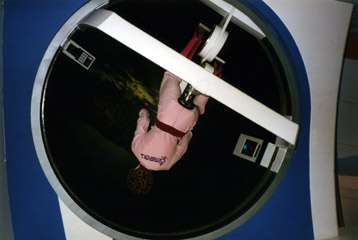 The Century 3 Intercolony Spaceship. It looked sporty like a space motorcycle. I think the virtual excercise machine above has come to exist in real life. 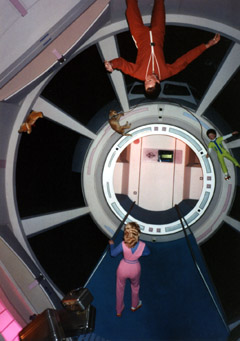 Sure makes walking Napoleon (the dog) a lot more interesting. Father never seems to manage to get that shoe! 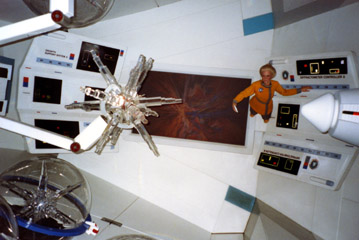 "Just think, materials from space for all kinds of industries back on earth." A final goodbye to a wonderful old friend. Horizons 1983-1999.

Production Update: I am in the final stages of wrapping up my next DVD title "Jeff Lange Remembers Epcot's World of Motion 25th Anniversary Collectors Edition". It is going to be a 2-Disc set packed with features! Please check back later this weekend for this all new release!

As always, if anyone wants to request a future DVD idea, Photo Memory topic or comment on anything, just drop me a line at suggestions@JeffLangeDVD.com.

Hello and welcome back to Photo memories #11, part 3 of Epcot Center's Horizons. More photos from my Horizons archives (and also one of my all time favorite attractions). 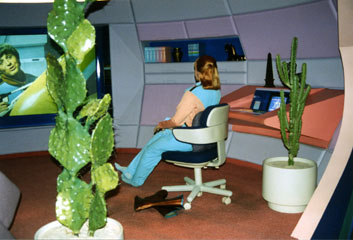 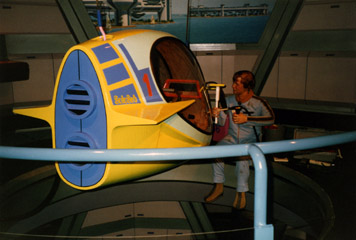 I remember the instructor telling the kids "don't horse around... don't even sea horse around!". The purple containers and yellow diving helmet are now on display at the prop warehouse prior to boarding the trams on the Backlot Tour at the Disney MGM Studios (see below). 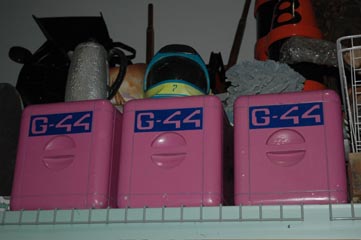 The giant Sea Bass shown here always reminded me of the ones featured in the 20,000 leagues Under The Sea attraction. Maybe they are from the same mold. 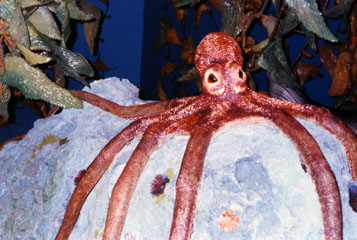 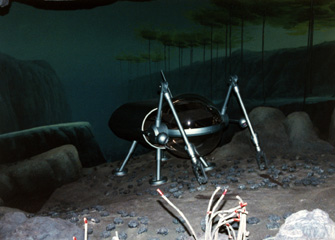 I hope you are enjoying this look back at this Epcot Center Classic attraction and please stop back soon for Pt 4 of the Horizons Photo Memories extended series. I am currently working on my next DVD title, Jeff Lange Remembers Epcot's World of Motion 25th Anniversary Collectors Edition. I have some great ride thru's (including one with the audio mixer and two microphones), the complete Bird & Robot show, full coverage of the Transcenter exterior displays and the GM corporate lounge, a promo movie not seen for 25 years, a fully restored slideshow of vintage photos and full coverage of GM Test Track. Check back here for more details and release information.