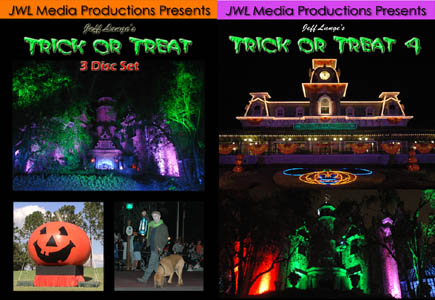 Also included in each order is a surprise Halloween Treat.

This offer will expire at Midnight on Halloween!

Hello everyone and welcome back for the Epcot 25th Anniversary themed photo memories feature as promised a few weeks ago. This edition features part one of a series on Epcot's 25th Anniversary Gallery. This is a temporary display showcasing concept art, models and historical memorabilia. Please note that these are only highlights as I ended up photographing all 720 plus images in the gallery over many hours. 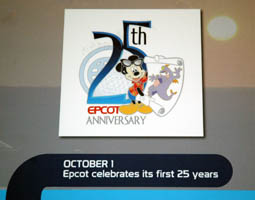 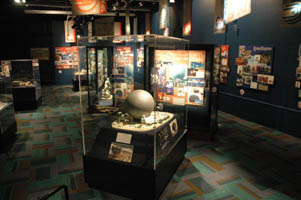 One of the slightly hidden gems of the exhibit is the 'Dream Catching Machine' from the classic version of ' Journey Into Imagination' hanging overhead. It is very detailed and reminds me of a similar model that was displayed for years in Disneyland's pet care center. If anyone knows the story behind these models please email me. I am very curious as to the history and origin of these great miniature props. 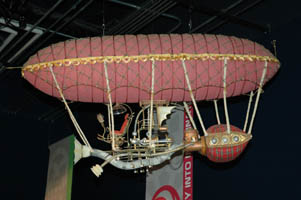 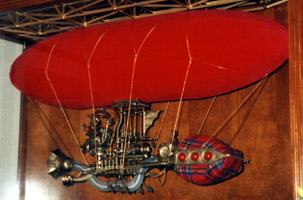 The next display features vintage cast member costumes. The plaque reads: "The costumes the Epcot cast members wear help them establish the character of the role they are playing in the show and help guests to understand a part of the story being told. This can be a polyester jumpsuit for a guide on a flight into the future or a recreation of a traditional outfit worn for centuries in a far off land". 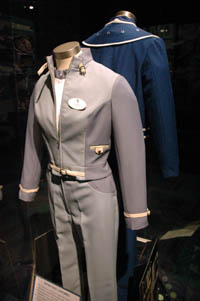 The robot below is from the Horizons - Lifestyles in the 21st Century display. The photo on the left is from the ' Horizons' vintage Epcot Center attraction. The next two shots are from the exhibit. It is great to see him again and in such excellent condition. I can only hope his friends share his good fortune. I will be featuring much more from this great exhibit in upcoming Photo Memory editions. Please check back again soon! 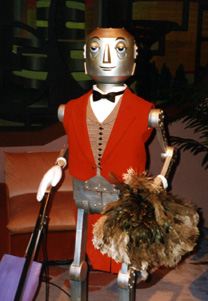 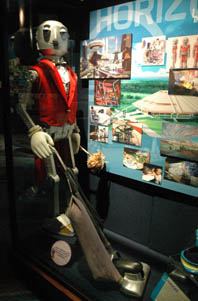 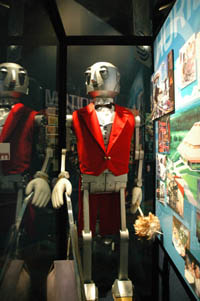 Trick or Treat 4 (Mickey's Not So Scary Halloween Party 2007) Bonus while supplies last.

Trick or Treat 4 (Mickey's Not So Scary Halloween Party 2007) Bonus while supplies last.

As a special thank you to those that order Jeff Lange's Trick or Treat 4 DVD direct from this site, we are including the following as a free bonus while supplies last.

This was the Boo! What? Where? When? Party Guide Map given out at Mickey's Not So Scary Halloween Party at Walt Disney World's Magic Kingdom. It makes an ideal companion to the new DVD.

Jeff Lange returns with an all new DVD from the 2007 Mickey’s Not So Scary Halloween Party at Walt Disney World.

Not So Scary Entrance Scenes

Your Not So Scary night begins as you enter the Magic Kingdom and encounter special Halloween decorations, music, fog and lighting effects.

As the wind starts to swirl the Headless Horseman appears for his Halloween night ride. He is captured from multiple angles galloping down Main Street USA and around the hub into the eerie night.

Mickey’s Boo to You Halloween Parade

Enjoy prime viewing of this spooky Halloween classic. All your favorites are here including Mickey and the gang, the Hitchhiking Ghosts , the grave diggers precision drill team and Goofy’s Candy Company train. New additions include a full size pirate ship featuring Mr. Smee and Captain Hook , a giant Tick Tock float, Captain Barbossa from the Pirates of the Caribbean movies and more!

A Grim Grinning Ghosts Spooktacular in the Sky above Cinderella’s Castle. This special Halloween version of the Wishes fireworks surround you in a haunted 360 degree visual sensation.

The Disney Villains get the chance to meet and greet their guests. Don’t be too afraid, they don’t bite....much!

As the clock strikes twelve get ready to experience the brand new recently upgraded Haunted Mansion. All 999 happy haunts are in their new residence featuring updated scenes! Seeing the mansion like this will make you want to experience it again and again.

We conclude the night with these haunted scenes from Main Street USA featuring the special Halloween displays and lights.

Hop in your Doom Buggy again and let Jeff Lange be your ultimate Ghost Host with Trick or Treat 4 .

Hello everyone and welcome back to part 2 of my Florida recap. After wrapping up all the festivities from the NFFC convention and World Chapter meeting it was time to start the second phase of the trip. 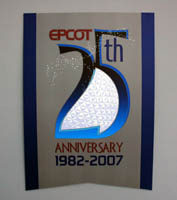 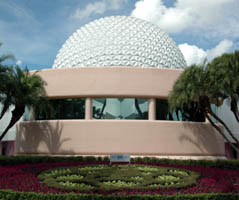 The first big event of the day was the Re Dedication of Epcot at 10:01 am. I made my way to the rope and moved quickly to be in the front row for the presentation. The ceremony was very reminiscent of opening day but on a much smaller scale. Throughout the day I was able to see Marty Sklar give his wonderful Epcot presentation and explore the new historical exhibit 'Epcot Creating the New World of Tomorrow'. I will be featuring images from this great nostalgic collection in an upcoming photo memories article. I also contributed to Magical Mountain's ' The Epcot Thing'. The event surpassed all of our expectations with attendance and enjoyment! My biggest contribution was hosting an Epcot History Tour featuring Ron Schneider and Jim Hill . I enjoyed meeting so many great people that day and I like to think I made some new lasting friendships!

In the early evening the rains came and poured on the park. What would an anniversary be without a little Walt's Weather? Everything cleared out for the finale and the crowd was really getting excited for the special anniversary fireworks. One last flash rainstorm delayed the show but then Illuminations: Reflections of Earth began... The crowd was ready and after the normal show ended an announcement was made for the special Epcot 25th Anniversary finale! Disney did not disappoint as the fireworks tag was spectacular. The combination of classic Epcot Center music and the overwhelming volume of explosions was breathtaking! 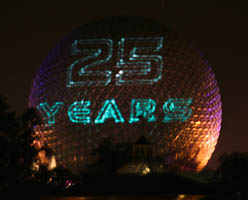 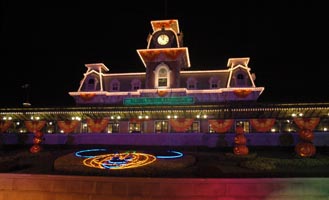 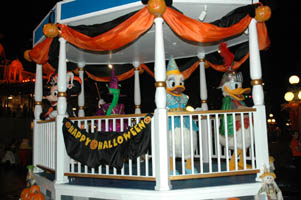 This years 'Boo To You' parade may just be the best ever! It has two all new floats from the Pirate & Princess party's 'Enchanted Adventurers' parade. The Pirate ship float features Mr. Smee as the lookout, Captain Hook behind the wheel and a crew of pirates! 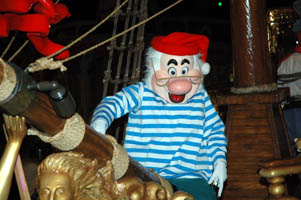 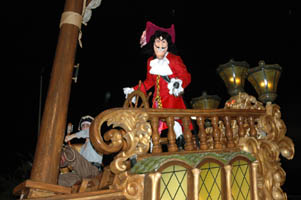 Closely following Captain Hook's Pirate Ship is Tick Tock. He is very impressive swaying down the parade route and appears very similar to the Tick Tock float from Disneyland's Fantasmic. Another new character for this years parade is Captain Barbossa from the Pirates of the Caribbean movies. Barbossa strolls the parade route with bitten apple in hand menacing the kids. Unchanged are the usual great party highlights, Happy Hallowishes, Trick-or-Treating, the Villains Mix & Mingle and the kids Halloween themed dance parties. 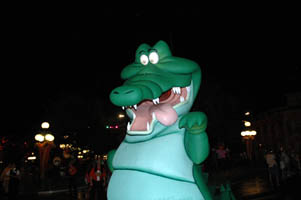 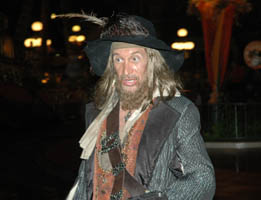 Production Update: I am deep in production on Trick or Treat 4 (Mickey's Not So Scary Halloween Party 2007 Edition) for a release later this week. Upon completion of the Halloween DVD I will start work on my Epcot's 25th Anniversary Celebration DVD featuring the re dedication, Illuminations: Reflections of Earth, Epcot's 25th Anniversary fireworks finale plus the Epcot Center historic display and much more! Please check back soon for release information and more details.

Welcome back everyone. I have so much to report from this past week in Florida that I will break it into 2 parts. Please check back later this week for part two.

The trip started out with the NFFC Florida Convention. It was another great event and I had a wonderful time attending the seminars and meeting many of you! The first day of the convention was held at Disney's Coronado Springs Resort. This was a big step for the NFFC as it was the first time it was actually being on Disney property! The day featured many interesting speakers including Virginia Davis of Disney's early Alice Comedies fame, The traditional NFFC lunch with a Legend Honoring Bob Matheison and Bill Sullivan, Florida favorites Terri Hardin (below) and Jim Korkis. 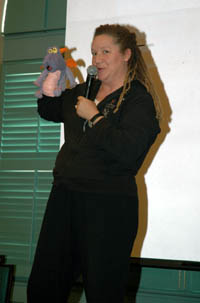 Day two was amazing as the seminars were held at Epcot Center in the former United Technologies lounge inside the Living Seas Pavilion! I applaud the NFFC for this move and hope to see them utilizing these type of venues for future conventions! 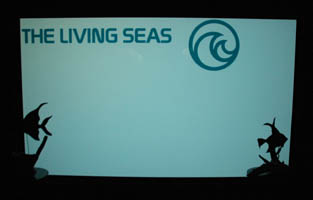 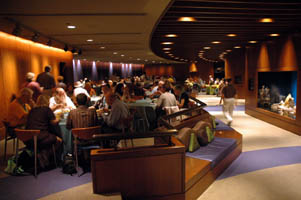 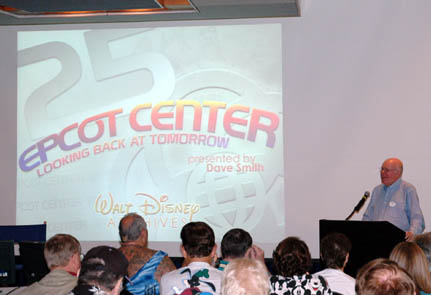 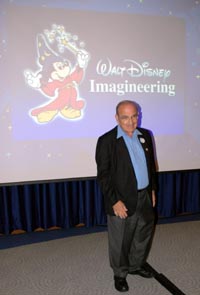 Saturday featured the NFFC Disneyana Show and Sale. This was a huge event featuring many vintage props and ride vehicles on display from the event sponsor Surplus Kingdom. I will be featuring these vintage items in a upcoming edition of my Photo Memories series.

The next big event was the NFFC World Chapter meeting held Sunday night on the eve of Epcot's 25th Anniversary. It was one of the best chapter meetings I have attended and really got you in the mood to celebrate Epcot's Anniversary the next day!. The featured speakers were none other than the original strolling Dreamfinder (and friend of this site) Ron Schneider and the final Dreamfinder Steve Taylor. The highlight of the night came when Steve was giving his part of their talk and Ron approached the stage with an actual Figment! This was a surprise to everyone and put a magical tough on a great evening! 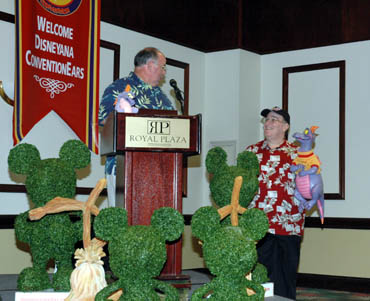 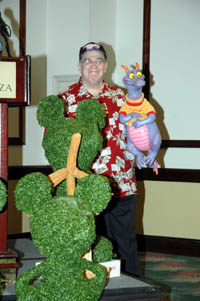 Please check back soon for part two featuring coverage of Epcot's big 25th Anniversary Celebration and the changes to this years Mickey's Not So Scary Halloween Party.

Production Update: I am currently in production on my 2007 Edition of the Mickey's Not So Scary Halloween Party DVD (Trick or Treat 4) for a release later this week then I will start work on my Epcot's 25th Anniversary Celebration DVD featuring the re dedication shot from the front row, a great multi camera recording of Illuminations: Reflections of Earth, the incredible Epcot's 25th Anniversary fireworks finale plus the Epcot Center historic display and much more! Please check back soon for release information and more details.