Thanks and Happy New Year! New from JeffLangeDVD in 2007.

Thanks and Happy New Year to Everyone!

Thanks to everyone for all the support over the last year. It has been wonderful seeing new (and old) friends and meeting so many nice people this past year.

Thanks to my old friends Jim Hill and Nancy Stadler for all they have done for me over the years and for the many adventures in New York City. Thanks also to Angela, Dan, Robert and Max for putting me up and putting up with me on my trips to Florida. We had some great times last year! I also want to thank my friends in California. I can always count on Mat, Roger, Allen and also BL for never failing to "make it happen".

Special thanks to my wife Florence for all the love, help and support. You are without compare!

Looking forward to 2007, the next release will be our 30th title and I need your help.The last title, Epcot's Holiday Traditions was inspired by a customers suggestion and it turned out to be one of the best releases to date. I am hoping that your suggestions will help me decide what the next project will be. There are many titles I will be releasing in 2007 but I want our 30th to be special. I have narrowed my ideas down to the following:

The first in a new series of 'Classic Epcot' titles (each featuring the original pavilions: World of Motion, Horizons, Journey Into Your Imagination etc).

Please send any thoughts or suggestions to suggestions@JeffLangeDVD.com. I really appreciate any and all comments.

I wish everyone a Safe, Healthy and Happy New Year! 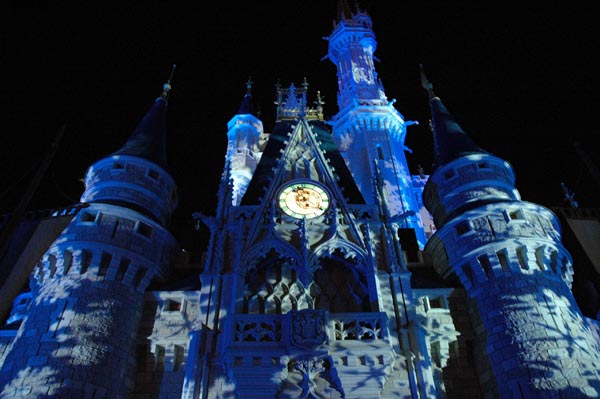 Happy Holidays from the JeffLangeDVD Family!

To purchase this new JeffLangeDVD title, click This LINK 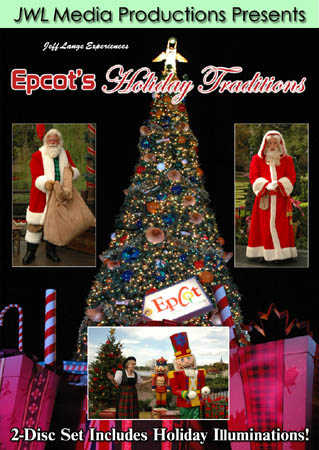 Seasons Greetings from Jeff Lange with this first in a new series of DVDs that feature unique experiences from the Disney theme parks. This 2-Disc Set showcases all the traditions from Epcot's Holidays Around the World.

Experience holiday traditions from around the globe as told by storytellers throughout Epcot’s World Showcase.

•Christmas traditions across Canada as told by the friendly lumberjack Nowell.

•Mexican celebration of Posada as told by the 3 Kings.

•Italy’s celebration of Epiphany as told by the good Christmas witch La Befana.

•A Chinese New Year's tale as told by the Monkey King.

•The African American Celebration of Kwanzaa.

•The Jewish traditions of Hannukkah.

•The Japanese story of the Daruma doll as told by the Daruma street vendor.

•Holiday firsts from Germany including the first Christmas Tree and the first Nutcracker.

•The Festival of Ashura in Moracco as told by the Taarji.

•Tales of Christmas past in the United Kingdom as told by Father Christmas.

•Traditions of the United States are told by Disney characters and friends during Mickey’s Tree Lighting Ceramony.

For the grand finale, we have included the holiday edition of Illuminations: Reflections of Earth. This special edition of the Epcot nighttime spectacular features a holiday finale to the tune 'Let There Be Peace on Earth' with narration by Walter Cronkite.

Candlelight Festival Guide included free with all orders from my store.

As a thank you to those who purchase my new title, 'Jeff Lange's Florida Candlelight Featuring Steven Curtis Chapman', I will be including a Festival Guide Program with all orders free while supplies last. These were handed out to those attending the dinner package at this years Candlelight Processional. The 16 page full color booklet features a guidemap of festivities at Epcot's Holiday's Around the World Celebration. Also included is a listing of the Candlelight Processional program order and bios on the various narrators. Purchase Jeff Lange's Florida Candlelight Featuring Steven Curtis Chapman here.

Experience one of the true highlights of Disney World's holiday season with this brand-new Jeff Lange DVD.

Jeff saves you the best seat in the house at Epcot's America Gardens Theatre for a presentation of the 2006 Candlelight Processional. A 400-member choir & a 50-piece orchestra performs Christmas favorites including 'O come All Ye Faithful', 'Away In A Manger','Silent Night,'Joy To The World' and much more as the story of the Nativity is told.

Experience this Walt Disney World holiday tradition right from the comfort of your own couch by purchasing a copy of Jeff Lange's ‘Florida Candlelight’ featuring Steven Curtis Chapman. Relive all the magic or experience it for the first time.

I have returned from Walt Disney World and Mousefest last week and had a wonderful time. I was successful in all my recording plans.

I recorded The Candlelight Processional, with Steven Curtis Chapman, from the best location I have ever had. It came out fantastic and I am in the process of editing it now for a release very soon. 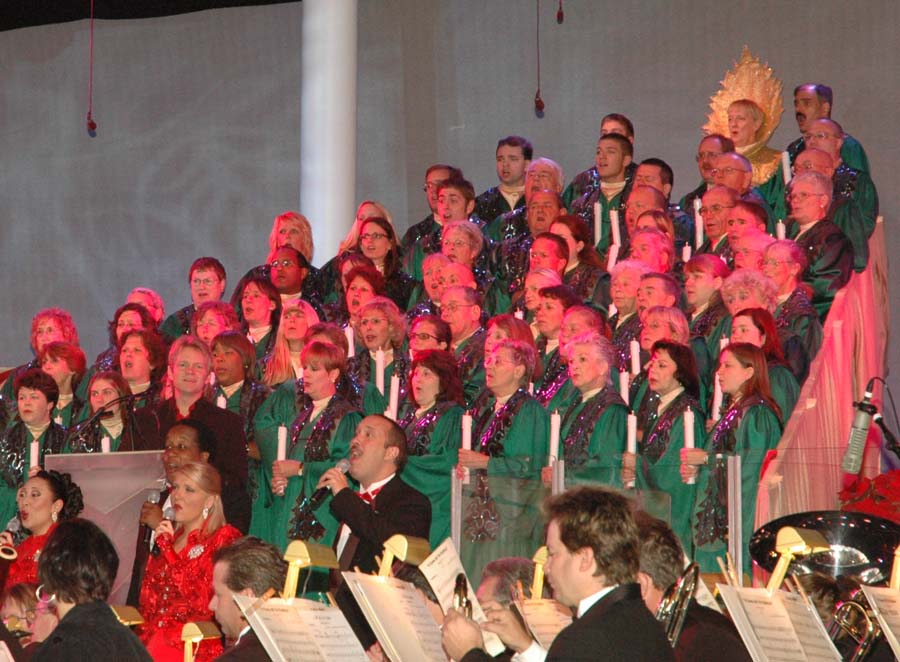 I am also working on a very exciting title thanks to a suggestion from a customer (Marcy) who will receive a free copy when it is released. She writes:

Have you considered making a DVD of the Santas at Epcot telling about the Christmas celebrations of the various countries? I just visited and that's the one thing I missed - I only caught a couple of the santas.

It's a nice way for me and my family to relive some of our trips since we don't have a video camera. I have the Mickey's No So Scary Halloween Party and am highly likely to purchase this years Christmas DVD,

thought the Santas would be a nice addition to the collection of Disney memories.

I thought it was a wonderful idea and spent the next 3 days recording all the Holiday storytellers at Epcot. It will not be a short DVD thats for sure as I ended up with almost 3 hrs of footage and I actually discovered much about Holiday customs from around the world that I did not know. It was a unexpected pleasure that I can't wait to finish. Look for a release early next week. 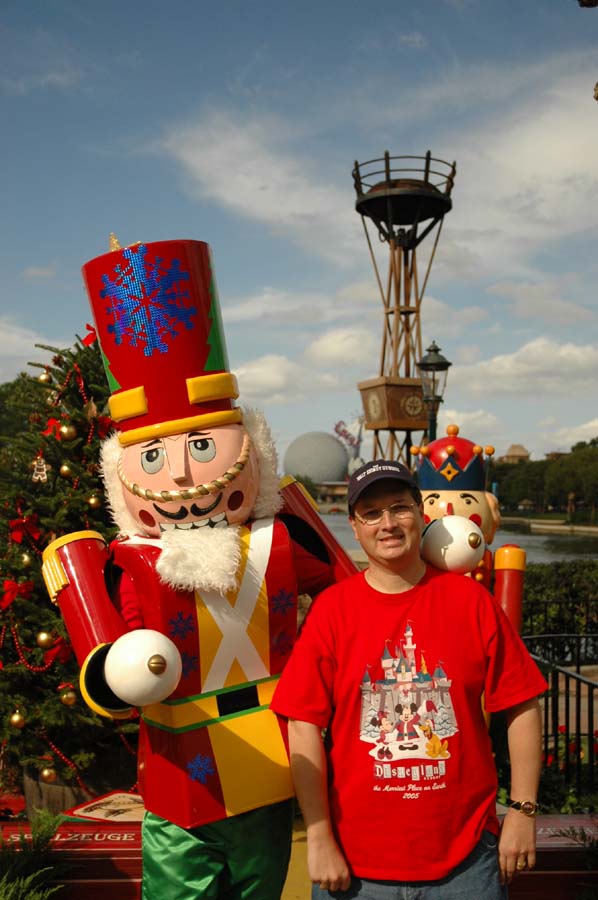 Thanks to everyone I met at MouseFest last week. It was great meeting and chatting with all of you. I will be posting more on Mousefest soon.

Merry Christmas and Happy Holidays to all!

I will be traveling to Florida yet again this week to attend MouseFest and gather more footage for upcoming releases. I will be attending the following events ot MouseFest:

A gathering of all of your favorite Disney podcasters, where hosts can meet one another, and listeners can put faces to the voices that they enjoy so much. Plenty of live podcasts and recordings will take place, so here's your chance to be "On The Air"!

May your heart be warm and happy. With the lilt of Irish laughter. Every day in every way. And forever and ever after. This Irish blessing will come true when you join Nathan and the staff of Magical Mountain for a round of shantys or other Irish faire. Enjoy Irish dancing, storytelling and music.

Disney guidebook authors, web site founders, podcasters, and members of many Disney fan communities come together at one big gathering! Experience what MouseFest 2006 is all about -- cyberfriends from all over meeting for the first time! This is the perfect place to also put faces to the names you may already be familiar with through various Disney-related websites and guidebooks! Everyone is invited and encouraged to attend.

At the Disney MGM Studios I intend to record the Osborne Family Spectacle of Dancing Lights and the Hollywood Holly-Day Parade plus at Animal Kingdom, Mickey's Jingle Jungle Parade.

As always, while I am traveling you will still receive the same level of quality service and guarenteed 24 hr shipping you have come to expect from JeffLangeDVD.