Hi everyone. Today is a very quick update as I have just returned from my latest trip to Walt Disney World. I attended and recorded the first two Mickey's Very Merry Christmas Parties and the all new Castle Dream Lights! I will have a full update later this week but photographs do not do it justice. I also have full coverage of the Osborne Family Spectacle of Dancing Lights, Mickey's Jingle Jungle Parade from Animal Kingdom as well as the Hollywood Holly-Day Parade from Disney's MGM Studios. I also recorded most of the talk shows from Super Soap Weekend for the ABC Soap fans and the holiday decorations from around the parks and resorts. 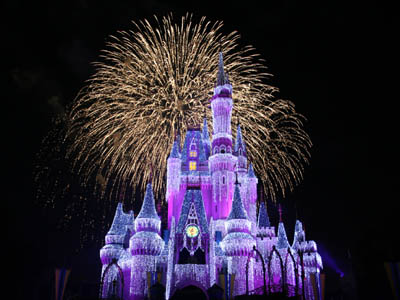 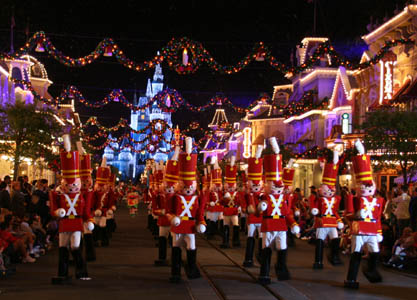 Toy Soldiers marching down Main Street USA with snow falling is an awesome sight made even better with the Castle Ice! (Thanks to Robert Bish for the great photos above).

Production Update: I am almost finished with my revised holiday titles. I am updating the retired Holiday Treat series with new footage and a new name. The first updated release will be ' Holiday Treat 06 ' featuring Mickey's Very Merry Christmas Party from last year now including footage from MGM Studios Hollywood Holly-Day Parade. The next release will be the all new 'Holiday Treat 07' featuring this years party with the brand new Mickey's Once Upon a Christmastime Parade, Cinderella's Holiday Wish (Castle Dream Lights), Holiday Wishes and more! Finally I will release ' Walt Disney World Holiday Classics' featuring the Country Bears Christmas Show, Mickey's Very Merry Christmas Parade from 2003, Holiday Wishes and The Osbourne Lights from 1996 on Residential Street at Disney-MGM Studios.

Please check back later this week for a full detailed update and have a Happy Thanksgiving from the JeffLangeDVD family!