Hello everyone and welcome back for a big update this week.

Unfortunately we begin on a very sad note with the passing of much beloved author & Imagineer Bruce Gordon. I really enjoyed Bruce's presentations at the NFFC Disneyana conventions and remember the huge smile he always had when he and fellow author/Imagineer David Mumford would throw Disney surprises to the audience. You could just tell how passionate he was about Disney and his work. My friend Jim Hill wrote a very nice tribute that I recommend everyone read HERE. Flo and I offer our heartfelt condolences to the friends & family of Bruce Gordon. 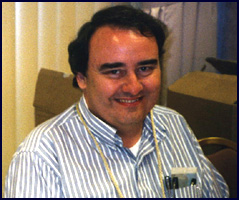 As promised we continue this look at the special 25th Anniversary gallery paying tribute to Epcot's history. This edition features some incredible images of Spaceship Earth construction on display in the gallery. We start with the model and move to a great photo showing the construction of the massive supports. 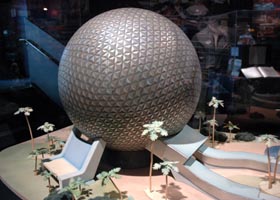 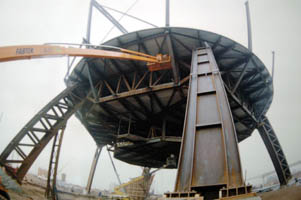 Below left is one of my favorite shots showing some of the 954 triangular shaped silver panels sitting in the Epcot parking lot. I also love the image on the right with the construction workers looking like window washers. 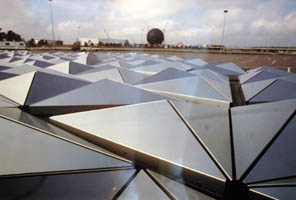 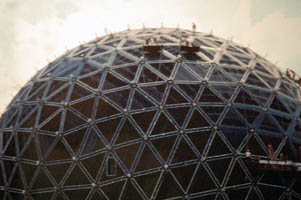 There are hundreds more great images like these on display in the gallery and I encourage everyone to spend some time there on your next visit to Epcot. I have not heard anything official but it seems like the gallery will be open thru 2008. 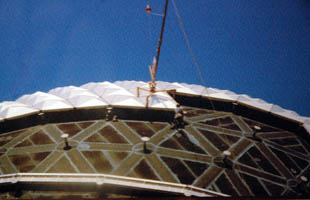 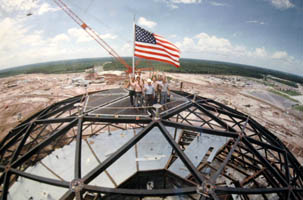 Believe it or not it's that time again as the Holidays come to Walt Disney World. This year there are some new offerings and changes.

Guests can enjoy festive surprises including an all-new Castle Light Show. Cinderella Castle is adorned with thousands of shimmering white lights, covering the turrets and towers like a glistening blanket of ice. The twinkling lights create an elegant wintry effect perfect for the seasonal celebration.

"Mickey's Once Upon a Christmastime Parade" celebrates the many festive moods of the holiday season, showcasing a series of holiday themes including a Friends and Family Christmastime Party, a sleigh ride through a Winter Wonderland, a romantic Fairy Tale Christmastime, a scrumptious display of Christmastime sweets, and of course Santa and Mrs. Claus in a grand finale. And for longtime Disney Christmas parade fans: soldiers, snowflakes and dancing deer are all still in the parade. The parade features original music as well as both classic and current holiday tunes.

Admission to Mickey's Very Merry Christmas Party requires a separate ticket. Tickets are $47.95 plus tax for ages 10/up and $40.95 plus tax for ages 3-9 (but with advance purchase, guests can save $7 per ticket for select dates). Note: Many party nights are sold out in advance. To purchase tickets, guests can call 407/W-DISNEY or visit disneyworld.com/holidays. 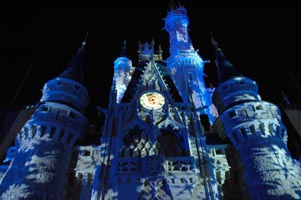 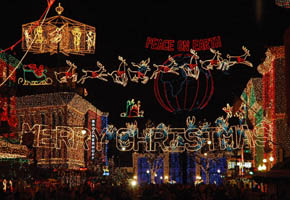 Returning again this year is the ' Osborne Family Spectacle of Dancing Lights' on The Streets of America backlot at Disney-MGM Studios. Also returning is Animal Kingdom decked out for the Holidays featuring ' Mickey's Jingle Jungle Parade' and Holidays Around the World at Epcot! Below is a preview of some of the merchandise that will be available only at ' Mickey's Very Merry Christmas Party' nights. 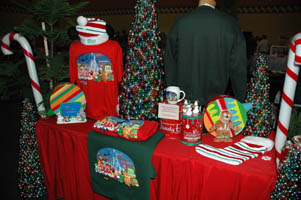 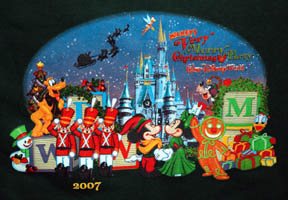 I am in the process of working on some great Holiday titles. The first release will be 'Walt Disney World Holiday Classics' featuring the 'Country Bears Christmas Show' (below) shot from multiple angles, 'Mickey's Very Merry Christmas Parade' from 2003, 'Holiday Wishes' fireworks and 'The Osbourne Lights' from 1996 when it was still presented on Residential Street at Disney-MGM Studios. 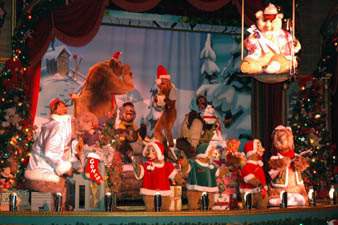 I also will be doing a 'Disneyland Holiday Classics 2' disc featuring some great footage from Disneyland including the Christmas Parade from 1985, Small World Holiday, The 50th Anniversary Remember... Dreams Come True holiday fireworks including the 'White Christmas' finale complete with a magical snowfall and more.

Finally, I hope to offer the current Holiday offerings from Walt Disney World including the all new 'Mickey's Once Upon a Christmastime Parade ', 'Castle Light Show' and 'Osbourne Spectacle of Dancing Lights'

I will be traveling to Florida next week to attend Mickey's Very Merry Christmas Party and record all the new Holiday changes. I will also be covering Super Soap Weekend and recording footage all around Walt Disney World for future releases. While I am traveling you will still receive the same level of quality service and guaranteed 24 hr shipping you have come to expect from JeffLangeDVD .

As always, if you want to request a future DVD idea, Photo Memory topic or comment on anything, just drop me a line at suggestions@JeffLangeDVD.com