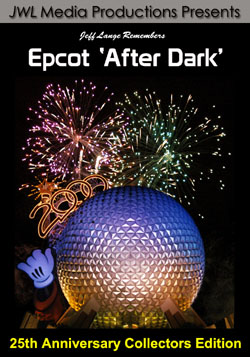 Jeff Lange takes you on a trip back in time to celebrate Epcot’s 25th Anniversary. This tenth in a series features Epcot ' After Dark'.

Experience the original IllumiNations, an International fantasy of music and light. With music as your passport, you’ll discover sights and sounds from colorful ports of call. As you celebrate your journey, the countries will be united by the festive elements of water, fire, and light! This was shot from multiple camera angles to ensure all the countries around world showcase can be seen clearly.

A special anniversary edition of Epcot’s most popular nighttime spectacle. Set to the festive music of many nations, 'IllumiNations 25' combines soaring sound, lasers and fireworks that fill the sky over World Showcase lagoon with colorful images of festivals worldwide. The finale is a grand 'Circle of Life' sky show of pyrotechnic pictures choreographed to the Oscar-winning song from 'The Lion King '.

This was the second incarnation of IllumiNations 25 featuring additional multi-media elements and a new score focused on classical music.

This was Epcot’s first parade introduced as part of the Millinnium celebration. The amazing procession, led by the 'Sage of Time', celebrates unity and world peace. A variety of large puppets and massive rotating drum units travel around World Showcase.

This updated version of Tapestry of Narions celebrates children, dreams and the legacy of Walt Disney. The parade begins with Dream Seekers dancing alongside the Dream Catcher. This visible dream sequence evokes ideas, images and emotions through puppetry, dance and rhythem.

The original version of IllumiNations: Reflections of Earth was produced For Epcot’s Millennium Celebration. This renowned nighttime spectacular features fireworks, full-color lasers, lights, water fountains and fire! The show tells the story of Earth and is divided into three movements titled 'Chaos', 'Order', and 'Meaning'.

Experience a beautiful combination of light, water and sound as you take in the Innovention Fountains 'After Dark'. All 1,068 colored lights focus on the streams of water to perform a water ballet.

A photo montage of over fifty vintage images spanning almost two decade of memories. Images include the Original IllumiNations, Tapestry of Nations / Dreams, The Millennium Village and more.

Celebrate Epcot's 25th Anniversary year after year or experience the magic for the first time by purchasing ' Jeff Lange Remembers Epcot 'After Dark'.